Posted on October 12, 2017 by funeralwatchdog.com

The largest funeral chain across Canada and the U.S., Service Corp International (SCI) has recently come under scrutiny.

A report done this year by the U.S.-based Funeral Consumers Alliance and the Consumer Federation of America found that median prices at SCI funeral homes in the U.S. for basic funeral services were “significantly higher” — as much as 72 percent higher in some instances  — when compared to the prices of independent funeral homes.

“Although media reports on SCI often described the company as the ‘Wal-Mart’ of funeral service, economies of scale don’t translate into cost savings for consumers,” Funeral Consumers Alliance executive director Josh Slocum said when the report was released.

“Quite the opposite,” he added, noting SCI uses “anti-consumer practices including relatively high prices that it fails to disclose adequately, aggressive sales that push customers to upgrade products purchased, and sloppy service that have led to court settlements as large as $80 million.”

The survey examined the prices of three types of service found at every funeral home: a simple cremation, a simple burial, and a full service traditional funeral with a viewing of the body.

The survey found SCI funeral homes charge a median price of $2,700 for a simple cremation, compared with $1,562 for independent funeral homes.

Burial services at SCI funeral homes had a median price of $2,845, compared with $1,893 for independents.

“One of the most critical ways families can control their costs is by shopping around, just as they would for any other product, but it’s difficult to do that for funerals,” Slocum said.

He suggested the federal rule “really needs to be updated to [make it] be possible for consumers using the Internet” to compare prices.

“Families dealing with the death of a loved one are often struggling with a range of bereavement issues,” the Funeral Consumers Alliance said. “The pain of getting overcharged by a funeral home may only add to their grief.”

SCI responded to the survey in a statement, which said: “We take the rights of client families, the Funeral Rule, and other industry regulations and requirements seriously.”

Texas-based SCI, which operates under its principal brand Dignity Memorial, owns more than 1,000 funeral homes and cemeteries across the U.S., controlling about 16 percent of the funeral industry, the Consumer Funeral Alliance said.

In British Columbia, the funeral industry is regulated by the Consumer Protection Branch, which requires funeral homes to provide price lists to potential customers.

Funeral service providers also must advise B.C. consumers of the right to cancel a funeral contract. Consumer rights can be found by going to the website www.funeralrightsbc.ca

To learn more about inspections and complaint-handling by Consumer Protection BC, read this backgrounder.

Funeralwatchdog.com was established to increase awareness of consumer rights when dealing with the funeral industry. It was also established to honour the memory of our mother, Holly Haliburton, 95, who died on Feb. 2, 2013 in Vancouver, Canada.

Days after Holly’s death, we had a horrible experience with a local funeral home operated by SCI, resulting in a lawsuit against the company by the Haliburton family, and against St. Paul’s Hospital and its board.

The Haliburton family also has been working with the Danylowich family of Vernon, B.C., who filed a lawsuit against SCI after the 2014 death of their mother, Kathleen (Kae) Danylowich, 90, who was cremated before the family had a chance to say their goodbyes at a memorial service.

Holly’s son, Jim Haliburton said: “We are working together for positive changes in the way the funeral industry operates in Canada. It is hoped that such pro-active consumer pressure will also encourage like-minded U.S. consumers to carry the same cause forward in the United States.”

He added: “In order to accomplish the needed changes, both families believe that consumer awareness is the way for Canadians to receive a fair and level playing field in the funeral industry marketplace.

“Consumers deserve and must demand funeral provider accountability, responsibility and fair-market pricing for all products and services. Mandatory safeguards are required.
Canadians need strong regulatory protection with fair and just consequences for those who break the rules. In addition, support of independent Canadian providers should be encouraged.”

Haliburton suggested “consumers deserve a nationwide funeral industry Code of Ethics that is clearly and easily understood by both consumers and providers. Strict checks and balances must be in place from the time of passing until the family’s final wishes are realized.

“Finally, we will pursue legislative reforms at all levels of government so no family will ever have to endure what our families have.” 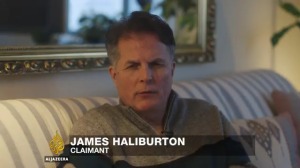 Jim Haliburton and John Danylowich are both featured in a new documentary, A Death in the Family, which aired Oct. 12, 2017; it is mainly the personal story of Canadian journalist Blake Sifton, whose family has owned a funeral home for more than 90 years:

Jim Haliburton wrote this about his mother:

WHAT CAN ONE SAY ABOUT HOLLY?
A DAUGHTER, A SISTER, A MOTHER AND A FRIEND
SOMEONE WHO SAW THINGS AS THEY WERE

SHE WAS NEVER JUDGEMENTAL, ALWAYS KIND AND UNDERSTANDING
SHE CAME TO THIS WORLD IN 1917, ONE OF TWELVE CHILDREN.
SHE SAW THE BIRTH OF THE AUTOMOBILE, AIRPLANE AND TV
SHE WITNESSED A WORLD DEPRESSION, DEVASTATING WARS AND INJUSTICE
YET SHE ALWAYS SAW GOOD, THE BEAUTY OF NATURE AND EMBRACED LIFE

HOLLY HAD MANY SIDES

A NURTURER WHO WOULD WELCOME THOSE WHO NEEDED A HAND
HER GENTLE AND CARING WAYS ARE STILL IN THE MEMORIES OF MANY
SHE HAD NO ENEMIES AND CHILDREN LOVED HER GINGER BREAD COOKIES
AS HER SON, I HAVE BEEN BLESSED BEYOND ALL MEASURE
SHE WAS ALWAYS THERE…..SOMETIMES THE ONLY ONE
WHEN I PLAYED SPORTS, SHE WAS ON THE SIDELINES
WHEN LIFE BEAT ME UP, SHE WOULD SEE ME THROUGH
HOLLY WAS THE BEST INVESTMENT GOD EVER MADE!

91 POUNDS OF INSPIRATION WITH TRUE GRIT AND N0-QUIT, INTENSELY ENERGIZED
SHE EXUDED CLASS, WORE 40 YEAR OLD CLOTHES THAT LOOKED BRAND NEW
I WILL REMEMBER HER “KATE HEPBURN-LIKE” STUBBORN FOCUS
SHE LOVED TO SEW AND KNIT, SMOKE CAME OFF HER KNITTING NEEDLES
I FOUND PEACE AND COMFORT WATCHING HER CREATE SOMETHING FROM NOTHING
HER GREATEST ROLE WAS BEING HER DAUGHTER’S BIGGEST FAN
JACKIE, NEAL, RACHAEL, BECKY AND ELI WERE IN HER THOUGHTS DAILY
AND FINALLY, THERE WAS JACK, THE LOVE OF HER LIFE!

DAD WAS AN UNSTOPPABLE FORCE, HOLLY HELD ON TIGHT…SHE WAS THE GLUE FOR 52 YEARS. THEY WERE MAGIC.
NEVER, EVER A HARSH WORD OR A RAISED VOICE
IN THE PAST FEW YEARS, HOLLY HAD TO CARRY ON WITHOUT DAD
AND HER LOSS OF VISION WAS A DEFINITE CHALLENGE, PICTURES WERE NO COMFORT

SHE OFTEN CALLED ME JACK AND I DIDN’T CORRECT HER

I BELIEVE MY PIANO PLAYING AND CONSTANT WHISTLING HELPED SOFTEN HER PAIN
MY WISH FOR ALL OF YOU IS THAT YOU HAVE A HOLLY IN YOUR LIFE
LIKE THE AMAZING BEAUTY OF A COMET ACROSS THE BRILLIANT NIGHT SKY
SHE WAS A FAST MOVING BEACON OF POSITIVE LIGHT WHO LEFT US IN AWE
SOMEONE WHO HAD A MEANINGFUL, LONG LIFE BUT, WAS STILL…..GONE TOO SOON!